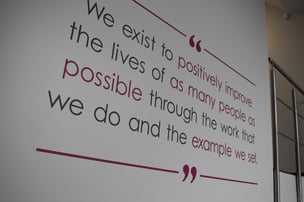 Every Monday we have a team meeting at 9.10am in The Academy space.

It gets recorded and put on slack for anybody that wants to watch it.

Sometimes it’s functional and we chat about stuff that’s going on and sometimes its just me rambling about nonsense but no-one has asked me to stop doing it yet and so it carries on, even if at times it might feel a little bit arrogant or conceited or stupid.

Today’s meeting was always going to be about the new signs and laminates that have been put up around the practice.

As you walk in the staff/Academy entrance now on the lift shaft is the ‘why’ of our business.

It’s long been cemented down but it’s here ‘we exist to positively improve the lives of as many people as possible through the work we do and the example we set.’

As you come up to the top of the stairs there are the values that we’ve set as a team, in the team days that we had during some of the darker times last year.

We have our 3-year vision which is in the staff area upstairs and we have some quotes from Greg LeMond and Frank Turner, together with Nelson Mandela in The Academy and a ‘hall of fame' for some of the really famous people that have spoken in our little education universe.

I wanted to talk about those and explain the significance of them and explain why it’s really important as a team that we’re together with all of this stuff (and I think we really are) and then I rode the outlaw triathlon bike ride yesterday and then it all came together as to what I needed to say.

I’ve ridden that bike ride at least 5 times (it might be more but I can’t remember now). It’s never been harder than yesterday.

In truth I was underprepared, both from a kit point of view, from an immediate preparation point of view in the week running up to the race and from a training perspective.

I’m trying to drag myself into a better state of fitness after 2 and 1/2 years of neglect and the outlaw bike ride (for me at least) is the truth teller.

It’s 112 miles in a time trial position (superman) without a stop (unless you have significant toilet issues, which I did), as hard as you think you can manage for the distance you have to travel.

As always, our little team got together and we have different members at different times but we’re always called ‘French Toast Mafia’.

Louis swam and came out the water in 16th place out of 1,400 people which put me into the top 1% of the field for the start of the bike ride where I realised I had no legs at all.

I managed to keep it together for about 90 minutes and then the full effect of what was still in front of me came to bear.

At the first big roundabout split, the first time that I could bail out, I really thought about stopping but I managed to push through.

At the top of the little hill at 50 miles where I was feeling dizzy, I just wanted to pull over at the side of the road and sit down (at about 15,000 peddle strokes still to go).

At the start of the big roundabout again (second chance to bail out) at 80 odd miles it took everything I had not to turn right instead of going straight on.

The last 30 miles were possibly the hardest thing I’ve ever done on a bike.

At the finish I sobbed because I had ‘suffered’ so much and I didn’t even have a runner waiting to run.

Simon, our runner had to pull out with a hamstring issue and we were unable to fill his slot so, we didn’t have a full team and therefore we didn’t finish and we didn’t get a medal or a t-shirt (quite rightly) because part of the process is putting a team together.

And so, what is the point and why do that and why not retire and never do it again?

Because the aftermath of something like that, when you go right to the edge of your capability is something quite other worldly.

When the pain subsides and even within 30 minutes we have a clarity, a vision of what you did and what you could do better and how you could change it and whether or not you want to continue.

Simon, my coach, texted me 30 minutes after the race had finished and 30 minutes after I’d said to one of the marshals who I know really well “I’m never f*cking doing that again” to which he replied “I’ve heard you say that several times”.

Simon messaged me to say “are we done with the outlaw bike?”, already my reply was “I was 30 minutes ago but I’m not so sure now”.

Health permitting I’ll do it again and faster and better and more prepared.

It was easy to explain the signs today and everything about the signs based around what happened on a bike ride yesterday.

It’s not about the bike though, the bike is just a metaphor for whatever it is in your life that you’re trying to achieve through the highs, the lows and the ups and the downs.