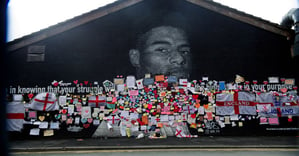 Sometimes it’s very difficult to write each day although years ago I committed to do that and so I try my best.

Other times there’s so much to write about it’s difficult to know what to say.

It’s Wednesday the 14th of July and this week is one of those weeks where there is too much to say.

In times like this my head works in a way that finds a metaphor for the circumstances that I’d like to talk about.

Todays metaphor is the Marcus Rashford mural in South Manchester and the story of how that was defaced following the football on Sunday.

On the one hand I want to write about the football and my views on that and my views on watching the reaction to that from so many people, particularly from the position of being a Scotland fan who is always conditioned to expect and accept a low level of performance.

And so, if England won on Sunday night then perhaps that’s what I would write about but sadly (and I mean that most sincerely) they didn’t win.

How should I teach a 13 year old boy, who is struggling to control his emotions as he enters into the crucible of puberty, what I think is the best (the right way) to react.

The response (at least as far as I could see it) highlighted some of the significant issues we have to address through British and even world society moving forwards if we hope to even survive, let alone thrive.

We have now successfully manufactured and perfected a mechanism of communication so that the very worst people in society can have the loudest voice which is then amplified by our media.

On reading around the response to the penalty shootout on Sunday, the first analysis was that social media suggested that there were 850,000 postings quickly after the outcome of which 1,116 were considered to be at risk or high risk.

I’m not sure who decides what is a risk or high risk but lets assume that they were the worst type of messages directed at the players, who were unsuccessful in their attempt to take England to a new level of performance and then were vilified for the colour of their skin despite demonstrating the highest level of commitment to the cause.

1,116 out of 850,000 is nothing and we can assume that the vast majority of the remainder of those were positive and supportive.

And so, there will always be a pr*ck in a thousand people but now the pr*ck has the loud holler where he can shout as loudly as possible which is then recorded and replayed to the maximum amount of people.

While the rest of us try our very best to fight against the institutional bigotry that is inherent in most of us due to the way we were raised and yet still we try to identify our character flaws and fix them, the mechanism of communication in society allows us to highlight the very worst and to amplify the fracture lines.

Firstly, I’m really proud of the England football team and I am not English.

I will never see trying your absolute hardest and giving everything you have but falling at the final hurdle, to be a failure.

I subscribe to the Infinite game, I continue to play but there is no end to the infinite game.

Secondly though, I also subscribe to the fact that sport is a metaphor for life, both the participation and the appreciation and both of those enable us to demonstrate our character and exactly who we are.

Carl sent me a message on Monday that I was going to post here but out of respect to him I’ll summarise it and say that we were both (he led the way on this) extremely proud of the diversity and the unity that the England team represents within society.

You guys are lucky enough to have some of the best players in the world, who represent the multicultural diversity in which we live and to embody, what I believe to be, a sense of what it is to be ‘new British’ or ‘new English’.

The English team have taken the knee regardless of the boos from some of their fans and stood up against what they believe to be wrong under the leadership of one of the most emotionally intelligent new leaders (Gareth Southgate) you’re ever likely to see.

They have embodied the concept of ‘diversity is a fact, inclusion is an act’.

I have used part of this last year to examine my own views and my own behaviour and my own potential prejudices.

As Malcolm Gladwell taught me in his fantastic book ‘Blink’, it’s possible to be a racist even if your mother is of black origin and your father is a white Englishman (that is Gladwell).

If you’re raised in a society where the media is racist, you may be a racist regardless of the colour of your skin.

I can also only see the world through the eyes of a man because they are the only eyes that I have.

But I will always try my best to walk in other peoples shoes and to understand their struggles and their pain and to help wherever I can.

I am scottish and my skin is white and I am a male and I am heterosexual and I am nearly 50.

At the moment in society that probably seems like the worst possible combination but I run an organisation who will always try to act with integrity and to be inclusive and to be the change they want to see in the world.

What I’ll never do though is condone the use of bigotry to fix bigotry.

All bigotry is wrong, whether it relates to the colour of your skin, your sexual orientation, your religious views or your accent.

I have suffered low levels of xenophobia for 26 years of living in England.

That is a small thing to face but I was also advised to leave my job at Glasgow dental hospital and school in the 1990’s because of my religious upbringing.

I was victimised as a boy because I went to a catholic school, even though my dad was a protestant and I spent part of my young university life being reminded on an almost daily basis of the amount of weight that I had put on.

I believe we are a much better society than the one which chased me out of Glasgow dental school to England but we are far from perfect.

People will still raise their head above the parapet when football teams miss penalties but that’s ok because it allows us to remove their heads.

Some people will not be able to be educated into the direction that society is passing but what the 848,884 people who sent positive messages on Sunday night can do is continue to move in what seems to be the right direction regardless of the toxic voices amplified by social media.