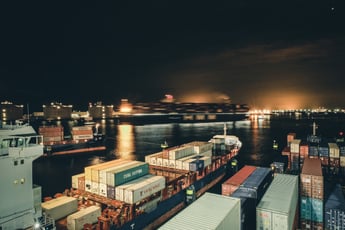 Just because we could, doesn’t always (or even mostly) mean we should.

In the modern world most of us never get the opportunity to take a bullet for someone else or to save someone else’s life through choice which would seem to be the real explanation and meaning of bravery.

What we do get though, is the chance to repeatedly stand at cross roads with the decisions we make and the route we take, impacts vastly on the lives of others, both now and tomorrow and a century from now.

Taking the time to lift our heads up and to see over the immediate future is becoming more and more difficult as we live in a world where we are bombarded with a fire hose of information 24 hours a day, which would have us believe that the immediate is everything and longevity is nothing.

We usually forget that we’re living in someone else’s longevity.

As I write this, there is a container ship stuck in the Suez Canal which is carrying 220,000 tons of sh*t for you to buy from China.

The blockage in the canal at this point now means there are three hundred such ships queued up, waiting to come through on a shorter trip to Europe from the Far East, going round the horn of Africa.

Those three hundred ships each carry in the region of 220,000 tons of sh*t for us to buy, that we cannot or will not do without.

Imagine all of us could culture the bravery and decide not to buy that thing that we don’t absolutely need.

Imagine we could try to detach ourselves from the status of having that new t-shirt or pair of trainers or car or pineapple or whatever it is we think we must have at the moment because we ‘deserve it’.

Imagine we could cut half of the container ships out of the Suez Canal, a canal that makes 2.5 million per day in tax for Egypt as millions and millions and millions of tons of this stuff traverses itself from east to west, to vainly attempt to sate our voracious appetite for stuff.

The sad thing is I really don’t feel that it’s likely that any reduction in that will happen any time soon.

One of the main action points after the pandemic is to get our economy back to normal which means to get our consumption properly back to the levels at which it was at before we stopped transporting all this stuff all over the place, all of the time, for no real good reason.

People used to think it was enough to know that they could’ve even if they didn’t, now they have to photograph it and demonstrate it to their friends so there is no getting out of the fact that, that thing must be bought and that photo must be caught.

There are no prizes in the modern circus of social media for the things you could’ve done, there’s only the hard, cold facts of what you can present to your tribe, to show that you have been ‘successful’ and won, at least for a short while, your small part of the game.

As I contemplate the purchase of another pair of Oakley sunglasses it’s hard not to remember that they’re transferred on a boat from far away in a container that passes through the Suez Canal and is my small part in the contribution of the beginning of the end.