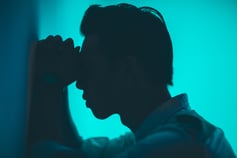 Too much to say here and I’m not quite sure how to get it out but it feels like time.

An unplanned conversation with my parents one morning at my house, so that they were aware of what happened, means that I can write here without it finding my dad (who reads my blog).

I’m not qualified to diagnose PTSD but I’ve read enough and seen enough to be able to diagnose ‘my PTSD’.

I don’t write this here to show off (it’s hardly something that you would brag about) nor do I write it to ask for sympathy from anyone else (I have extraordinary people who support me, who give me all the sympathy I need). I write it for you, in the tiny hope that it might make yours just that little bit better, to understand that many, many of us are carrying a burden right now which at times is overwhelming.

I have now spoken to many people over the past few months about my PTSD and in so many cases, I watch their shoulders slump and their breath exhale as they realise that it’s ok that they feel or have felt in a similar way.

I hope this little piece of writing does that for other people too.

One of the trigger points for writing now was the TED podcast of the interview with Simon Sinek that Andy passed to me last week.

He openly talks about the effects of the last year on him and the strategy he developed to ‘never cry alone’.

That was perhaps one of the big mistakes I made in 2020, was I’d always cry alone.

Often on a stationary bike in a shed or on a walk with the dog so that I could return back to public facing like nothing was wrong.

In his interview Sinek talked about his advice from the US Marine commander who had helped him write his book ‘Leaders Eat Last’. By its nature PSTD comes post (after) the event has occurred and in combat often 5 months after, for me on a very similar time scale.

The greater part of the experiences, which led to my problems will hopefully be described later now that I have started to take the lid off things but it centres around the huge commercial property project of building the new practice and the additional buildings, the catastrophic effect that had on the business and the people within the business, the series of events which could not have been scripted to be any worse really and then a pandemic being the cherry on top of the sh*t cake that basically came to it’s head in May 2020.

Key clinicians leaving the practice, key clinicians deciding not to come to the practice within days of the start of their contract, one clinician sitting in front of me and saying that my new practice was not fit for purpose and then leaving after one days work, five maternity leaves, a 25% reduction in turnover due to the distraction of trying to build a new practice, millions of pounds of additional cost in building a new practice that were unexpected, snow storms, wind storms, closure of the main road to the practice for 18 months so that people couldn’t get there, the CQC telling me that we would not be able to open for 3 months one week before we were supposed to open, a GDC case, COVID.

A promise made to my wife at the start of the project that no matter what happened we wouldn’t lose our house and then a telephone call from the bank in May telling us that we might be losing our house.

The super clear and obvious realisation of the responsibility of 40 peoples mortgages and lifestyles and families and the visceral urge to protect them all, at the same time trying to protect my own family and my own families lifestyle.

All of the above, a significant project.

The events that lead our PTSD is as individual as our finger prints but often the symptoms are dazzlingly similar.

For me it was intermittent but starting about September or October I think, just when it seemed to look like things might be ok or at least a little bit better than absolutely terrible.

Obsessive checking of the numbers in the practice on an hour by hour, session by session and day by day basis, meant that any small fluctuation anywhere (a patient cancellation for example) would send you back down the rabbit hole again.

Any gap in any appointment book for any reason - rabbit hole.

Bizarre made up targets with no objectivity and no reason not being hit - rabbit hole.

Worse than that though was the necessity not to spend any money at any time, on anything in my professional but mostly my personal life.

A requirement to buy an inner tube for my bike - rabbit hole.

In a bizarre state though, I had no problem with my family spending money on anything and I wouldn’t pay any attention to that. It was my own personal responsibility to not spend a single penny on anything and then sometimes the absolute need to do so sent me down the rabbit hole.

It seemed to culminate when Rob Oretti arrived at the practice to do his master class which we’ve now delivered at least three times but on this occasion (as I have on every other occasion) I resolved to be a delegate for the full two days to try to make me better at implant dentistry.

I took a seat at the back of the room in our Academy, with my branded pad and branded pen and lanyard with my name on it and all of that stuff and within 90 minutes I was toast.

I couldn’t watch and I couldn’t look, all I could think about was that we would have to shut forever quite soon because this would never work.

I left the master class and went to my office (it took everything I had to not leave the practice entirely), I called Hayley (omg what would I have ever done without her) and asked her to try to talk me down from where I was.

I’ll never forget the phrase “I don’t know what else to tell you to show you that it’s alright”.

How selfish of me to put my PTSD onto her, who was trying to deal with her own from the huge trauma that we’d both been through.

It’s better now, much better and in fact so much better that I can write some of it down here.

And so, what’s the point of putting this onto you and putting down forever on the internet this litany of pain and disaster.

The point is this:

In a world of #feelingblessed, where everything is great as long as we’ve had our eyebrows and our teeth done, have bought a new bag or watch or car and our lifestyle remains unchanged. It’s very easy for the thin veneer to crack and reality to sneak through.

Lets try to get past that cr*p now as much as possible, for some of us it might be a long way back to wherever back might be but it’s the journey that matters, it’s the sights we see along the way and that road is much, much better travelled with company.