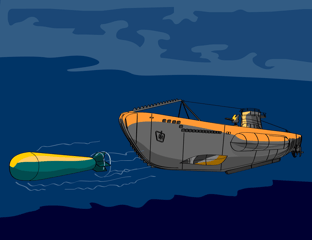 It’s round about 1984 or maybe 1985 and the bedroom that I had as a teenager has a Velux roof window which I can crack open and look at the view towards the River Clyde and beyond.

Directly from that window I can see the United States naval base at Holy Loch on the river.

This is the place where the 688 class nuclear attack subs (and others) come to reprovision and to rearm before setting off again to lie and wait for the order to obliterate Russia.

Just over the hill is the United Kingdom submarine base at Faslane which has much the same function.

As a 13-year-old boy, my son Callum is living through the pandemic (obviously all the rest of us too) with all the darkness and uncertainty and lack of hope that seems to come with it for so many people.

As a 13-year-old boy I remember hearing the tales about how we had two Russian warheads targeted, one for each base which would detonate above the Clyde.

At the point where I was looking out of my window, the Clyde bends south and is 3 miles wide and hundreds and hundreds of feet deep.

The story was that it would evaporate as soon as the warheads detonated.

The story was that my teeth would evaporate as well!

I would watch the news and see tensions rise and fall between the west and the USSR and wonder whether next week was going to be the week and lie awake in my bed wondering.

The world was dark, there was the miners’ strike and the closing of shipyards all the way up the river and the death of IBM which was one of the major employers which was going to save us from the shipyards’ death.

Over all of this was the fear that at any minute now everything could just be wiped out at the whim of a politician (by Margaret Thatcher or Ronald Reagan).

I think it was during those years that I developed the f*ck you attitude because things couldn’t get any worse than that, and the fear of complete obliteration and therefore everything else seemed to be a bonus.

The world is dark at the moment and the days are long and we can’t see the summer or when things might be better, or we might have adapted.

What we did was we listened to music and we talked to each other about the fears that we had of this kind of thing happening and then a generation grew up into adults thinking that they never ever wanted that to happen and somehow the fear disappeared.

I don’t think it will ever seem as dark as that again but to people who never experienced it or never thought about it at that time perhaps this is the darkest it gets.

Nihilism passes if you can look for the joy in the simplest day-to-day things.

Perhaps our New Year resolutions should be to find the simplest way out of the biggest problems.