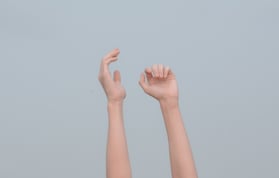 Some years ago I saw a business coach called Nigel May Barlow speak in London with my friend (and Tom from The Academy’s dad) Shaun.

He had just released a book on business coaching and had coached many of the big companies in the world having previously been a barrister.

His main mantra though was “it’s already late”.

So, what are we waiting for?

When you address a group of people and ask them to raise their hand as high as possible, to really stretch it up then they lift their hands up.

When you ask them to stretch them a little bit higher, they all do.

You wonder what was holding them back from raising it that high in the first place.

If you ask young school children to do the same their arms nearly rip out of their sockets.

So, what are we waiting for?

Are we waiting for the end of this or the next big thing or a holiday or a break in the madness???