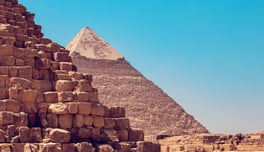 Imagine a pyramid built from small bricks, 3 dimensions but wide base and tapering to the summit.

That’s what I see.

My wife has been a children’s cancer nurse for 25 years and she has not had any other husband during that time apart from me.

During that time I would estimate she has positively influenced the lives of thousands of people, including the patients and families of children suffering from cancer.

She sits at the peak of a pyramid but underneath her are the people that helped her build her pyramid, of which I am one (a very, very insignificant brick).

That said though, and while my little brick sits somewhere on the very base of Alison's pyramid, it is a brick in her pyramid.

I have had a very tiny and almost inconsequential influence on every single patient Alison has seen, as I am always there should she require it to discuss or vent or become upset or just need to tell a story about something that’s going on.

My own pyramid (that I sit on top of) has so many people beneath me who have been utterly influential in allowing me to reach the summit of my own pyramid but it’s impossible to even begin to name any of those individuals.

If you remove one or two of those people it’s likely that I would still be somewhere close to where I am but if you remove any more than that, I begin not to be me.

I hope that I am part of other peoples pyramids too and play a small part in not just Alison's but any other pyramids in the infinite pyramid.

There are people who’ve spoken to me in the past and said that discussions or meetings or courses or any number of things that we’ve done to help or touch them in their careers have made them better or changed their course of action or allowed them to influence patients in a positive way and as a result of that, I am part of their pyramids but of course Alison is therefore part of their pyramids too because she is part of mine.

Were it not for Alison I would not be near the top of the pyramid that I’m at and therefore would not have been in a position to influence anyone else in their pyramid in the way that I have.

(Alison is quite a huge insignificant part of the foundations and support structure of my pyramid).

And so, after all of this rambling about pyramids and planks and influences, what is the point?

The point is that every day that we wake up, we have the opportunity to make it slightly better or slightly worse.

I firmly believe that we don’t have the chance to be neutral, being neutral makes it worse.

That is not to say that everyday we succeed in our intentions, sometimes we perhaps even make it better unintentionally even though through our action, either conscious or unconscious, we decided to make it worse and many days we will try to make it better and fail.

In our life spent though, trying to leave it in a better state than that which we found it, we’re liable to build pyramids.

We’re liable to solidify existing pyramids and make them stronger and allow people to build better and greater pyramids and therefore move things along.

In choosing not to make things better, we start to take bricks away.

Take too many bricks away from too many pyramids and the entire thing will fall apart.