How are you today? 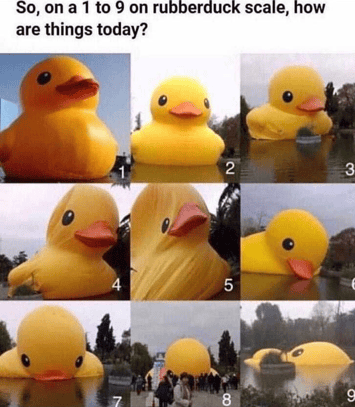 We have a thing in the practice when we’re looking after each other and asking if everything is alright, we say, “are you ok?” and the standard answer is “yes” because people say yes automatically however they feel and whatever they mean.

The next thing you say is “no really, are you ok?”.

You do that when you look at someone straight in the face and 9 times out of 10 they’ll actually tell you the truth.

Don’t do it unless you’re actually interested because you’re liable to hear the things that are going on and you might be asked to help, so if you don’t want to do that it’s best to take the first answer.

The second thing we can do though is the rubber duck score.

This was introduced to me by Rosie and it comes from Instagram (I’m afraid) but the concept of objectively asking people how they are day after day is something we’ll be introducing to the work to give us a handle on how everyone is doing.

We didn’t invent it and in fact the first time I heard it was the App that Sky developed for their riders, mechanics and team members where everyday they scored using smiley faces to see how they were.

They gave them an overall score or moral amongst the group which they could use to check back to see how things were.

The image above shows you how it works, scoring from 1-9, fully inflated with your head held high or completely deflated drowning and about to die. Take your pick from the pictures (pictures always work better) and then just score it over time and make a graph.

If you’re going to do it for yourself do it at the same time each day, far from being a bad thing and it sometimes shows you that you’re doing a lot better than you think you are.

Alternatives are to use the headspace app or about a billion online if you want.

Sometimes measuring things just makes it better, objectively they’re often not as bad as you think.