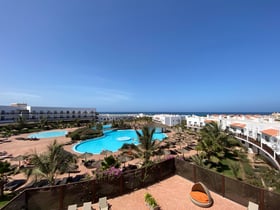 I’m going away today, the trip of a lifetime.

Every trip is actually the trip of a lifetime because no trip is the same in your lifetime.

This time me and the boy (that would be my son Callum who is now 14) are heading to Cape Verde on an all-inclusive which we got super cheap because I was prepared to comprise his conventional education by pulling him out of school a bit early and taking a fine!!

In truth, I didn’t take him out because of the price, I took him out for the convenience but that’s another story.

And so, for a week I’ll be ‘off the grid’ and in digital sanity heaven (Callum and I have agreed that he’ll be able to have his phone first thing in the morning for 30 minutes and after it gets dark and at no other time).

And so, what to do with that space?

The first and most important tool that I’ll have with me is a notebook.

However, I developed and however I grew up and by whatever mechanism it is, I spew out my thoughts onto paper through the ballpoint pen.

It’s actually not a ballpoint pen, it’s a particular design of pen but I’m now so tied up with this process that it seems difficult to break from it.

So, what I’ll be doing with this paper and pen is thinking about what my life is like at the moment and thinking of how that is tied to the life I would like to have and trying to bridge the gap between the two.

I often start with a mind map and put myself in the middle and then section off around the edges like a clock the different things I would like in my life or the different things that I have and decided how much of one I’m having at the moment and whether it’s enough or too much.

And then I plan all the things that would make me be the person I would like to be.

The next thing that I’ll put in will be 2 books, one will be non-fiction and one will be fiction and I didn’t decided what they were going to be until quite late on.

I’ve also put in ‘To Kill a Mockingbird’ for Callum and, even though he never reads books, I’m going to try and force the point because it is such an extraordinary thing.

The other thing we’ll put in is films on an iPad that we’ll watch in the evenings later on despite the fact that Callum’s 14 and now, at least in his own eyes, a grown man, he’s not shy about cuddling up with his dad later on and watching something brilliant on a screen.

I’ll have some swim shorts and stuff and a pair of sunglasses that have been chewed by my dog but none of that’s relevant because no one will be looking at me and the most important thing I’ll have though is space and usually, at least for me, what happens in the space is looking into the future.