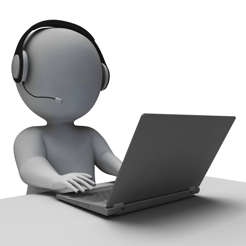 Sitting in the virtual court case on Tuesday gave me the opportunity to sit back and observe how the system ran and how different people interacted with the system that had been put in place to replace face-to-face contact (this has happened so much in so many parts of our lives).

The online system that allows you to hold civil court actions virtually is no different to any of the other online systems that we’re using (think teams or skype or zoom or anything else).

All work on a similar principle and all subscribe to zoom etiquette.

Was I to be attending the court case in person and if I was required to go into a waiting room with all parties present, I wouldn’t walk in shouting and glaring and sizing everyone up as obviously as possible.

It’s for that reason that walking into an unknown virtual hangout platform, for me, usually involves audio off and video off.

So it was that I arrived in the virtual waiting room for the court case on Tuesday.

It was only really at that point that it struck me; that if you’re not familiar with Zoom etiquette or how to conduct yourself or control the technology of the modern ways of communication within a pandemic, you really are going to be left far behind at no fault of your own.

Let me introduce the protagonists:

This was the barrister for the claimant (the person who was suing me, who ran into the back of my car).

This chap was ancient, with absolutely no idea how to work the platform within which he was working.

She was very good but never showed her face once, clearly has been working in the virtual platform for some time and understands the rules.

She was a referee.

An old guy who had seen the accident from the side of the road, he was there for a day out (he’d brought his wife along on the zoom call for support!). More about him later below.

The guy who ran into the back of me. This is a strange one because he was sat facing forwards as if looking at his television but with his camera pointing towards his left ear.

He would have to turn 90 degrees to his left to look into the camera from the armchair with which he was sitting!

Estimated at about 32 years old, very clever young female barrister who was completely switched on, not only with zoom etiquette but court etiquette too. Very clever.

With my video turned off. It was only when I was asked to turn the video on by the usher that I did turn it on which brings me to the next point.

As far as Zoom etiquette is concerned, you have the opportunity to control your environment, your background, what you’re wearing and how you’re presented. If you are not switched on enough to understand that everyone in that meeting takes about 10 seconds to form an opinion of you subconsciously then go back to reading ‘Blink’ by Malcolm Gladwell to find out why that is the case.

You only get one chance to make a first impression and in a situation like a court case; your first impression is absolutely critical. If you think the judge is not swayed by that go back to Blink again and find out what happens to the outcomes of court hearings in America when they go after lunch instead of before lunch!

Back though to the witness who attended with his wife. They were the equivalent of professional funeral goers.

If you’re unfamiliar with this concept it’s usually a husband-and-wife couple who plan their weekly shopping around how many wakes they are going to be attending this week and to sidle up to grieving relatives at funerals with a half-concealed smirk on their face, even though they’re expressing deep sadness at the loss of an individual with one eye on the platter of sandwiches for the ‘after party’. I know these well, I had an old great-aunt and uncle who were the original professional funeral goers.

And so, there I am on the virtual hearing, listening to the opposition barrister having a phone call with the claimant about whether he should support a settlement of 50/50 split in the case because he doesn’t know how to turn his audio off on a virtual court call.

After the pandemic is over (and it will be) Zoom won’t go away and the advance of new technology won’t stop.

It’s fine to not adopt it but you will be left in technological poverty and if you’ve decided to retire from the advancement of the human race it’s fine but if you haven’t or you can’t, it’s probably worth a crash course.