Conversations with the boy (again) 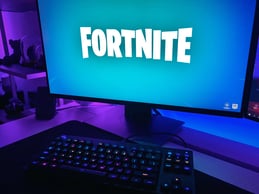 One of the joys of lockdown and the change in domestic circumstances has been the greater contact on some days with my children than I’d otherwise have had.

The nature of things in our house (the girls are into horses) is that Callum and I would spend more time together and that has lead to many really fascinating conversations with a 13 year-old and some of which I’ve already recounted in these pages.

These conversations make me think and test me around my own values and my own beliefs as Callum tries to begin to navigate the world himself.

We walk to a basketball court which is about 20 minutes away and then we play basketball (usually competitive shooting because I can’t run) and then walk back.

The conversation on the way back the other day centred around (believe it or not!) business models.

Callum, like almost all of his generation, has had a life influenced by Fortnite and has spent a considerable amount of time on Fortnite.

This gives me some sort of solace in the amount of time Callum has played fortnite through the first and second lockdown.

By pure chance and luck, he was involved in the early stages of fortnite because he got his xbox in 2017 and season two of fortnite started in January 2018 when he first got onboard.

At that stage he started to accumulate skins and axes and gliders.

A glider on fortnite is how you jump out of the battle bus and float down onto the island which is essentially The Hunger Games.

The axe is your first weapon but it can be anything from an umbrella to a baseball bat (sounds terrible and gruesome) and your skin is the appearance of your avatar.

Since that time fortnite has had one billion downloads and of course the game is free and it is the in-game purchases that make the money.

A skin for you avatar levels out at about £8 on fortnite currency and remember there are 1 billion downloads.

While many of those downloads will be duplicates or inactive, you begin to see the scale of the financial model.

What Epic Games have done is made skins rare and they release them for limited periods of time for people to be able to buy them and use them (once purchased you can use forever). Callum has skins which date back to season two and 2018 and for that reason someone would buy his account as his has skins from every season apart from season 1.

This is where the modern business model and commodity model comes in.

The other day fortnite released a skin from season 3 which no one has been able to buy since that time (spring 2018) and it levels out at about £8 for the skin.

And so, on the way back from the basketball hoop we discussed how many people we thought might buy the skin and how much money it costs Epic Games to sell it.

The code is already written for the skin and it’s already in the system, it probably takes one line of code to release the skin for sale plus there’s probably some sort of cost or handling fee for the purchase of a fraction of a percent.

Let’s say 0.5% of all downloads decided they wanted to have that skin, make that 5 million and you can times that by £8.

For limited release of 1 rare skin that was created probably four years ago is a 40 million pound hit.

Try making that in dentistry or as a physiotherapist or any number of other occupations.

If you’re fortunate enough to work in a company like Epic Games, clearly that model is working for you but one of the difficulties we have is that we are referencing our status against people who work in industries that allow them to make money way beyond that which is made by the average individual.

Important for me to explain that model to my son who’s 13, who looks on at the YouTube guys who are leveraging electronic content for extraordinary fortunes.

I don’t really want my son to be a famous Youtuber because I’m not entirely sure that it would make him satisfied and happy but it is important for guys of his age to understand how the world is changing.

It’s also reasonable to remember though, that when the YouTubers mum gets Covid, she still needs a doctor.