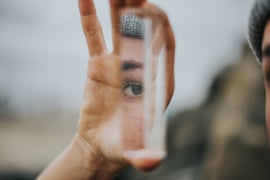 I am enormously successful (according to some peoples metrics of success).

I am devastatingly unsuccessful (according to others).

Perhaps measuring success in itself is unsuccessful, perhaps chasing ‘success’ is toxic and pathological.

To me, success and contentment are about the same thing so, therefore I chase contentment.

The problem is that I cannot be content sat back and waiting and watching and perhaps that is my biggest issue and my biggest problem overall.

I love social interaction on a personal one-to-one level or in small groups where we are inspired in creating and doing things that feel cool.

I hate dealing with money in any way and therefore I try to avoid that, despite the fact that I try to run a business which cannot exist without the generation of surplus money.

And so, as I move towards entering my sixth decade (assuming and hoping I get there) it’s once again time for me to reflect what is on my white stone (a previous blog about Charles Handy and a passage from the bible about ultimately finding who you are at the end of your life).

I feel myself sucking back into defending what my own success is again and the need to do that, probably because I’m heading towards a big birthday.

It’s not enough that we ‘want’ to be successful, it’s far more important that we reflect on what we think success actually is.