All the days from then 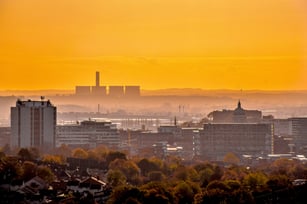 Almost 26 years ago I arrived in Nottingham for only the second time ever (the first time was for an interview) with a car full of my life as I pulled up at the doctors residence at Queen’s Medical Centre for a one-year work holiday before returning to Scotland.

I wonder what conversation I would have with that person now if I were to meet him.

Early next year I’ll be 50 and so I guess it gets to that stage in life where you start to look back and make sure your ladder that you’re climbing (or have climbed) is up against the correct wall.

You look back to think “have I used the days from then until now in the way that I’d want to”.

I started to think about this on the recent dog walks, as I walked down to the school at the end of my road which has two large areas of empty land present on either side of the drive.

On the right hand side there was going to be an eco-Sainsbury’s for some years but since they stopped building now, Lidl have got hold of it and are building a supermarket. On the left side of the drive was some spare land that Sainsbury’s didn’t want but wouldn’t release and my new practice was going to be there some years ago, as we tried to buy that land.

I think back to the guy who was trying to buy that land and the ridiculously low cost that the land was being priced at and wonder what I would say to him.

For ages I’ve said that I’d aspire to work within dentistry until I’m 85 and so that would give me another 36 years or so but of course, many things might get in the way of that.

26 years on from arriving in Nottingham and 36 years left to go (or as many as I’m able), must be making sure that every day from here to there is used as well as possible to make the biggest impact in the direction that I’ve chosen to make.

Wonder if I’ll be able to say the same if I make it past the line at 85.