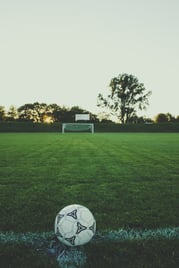 In the Mustangs match on Sunday we had a minute's silence for Philip.

Always interesting these things with a group of teenage boys, huddled around the centre circle, asked to stand still and keep quiet to pay respects for someone that they’re not really fussed about and who they didn’t really have any connection to, but on we went with the 18-year-old referee and the two teams around the centre circle facing each other.

I have to say, it was super well respected and entirely silent for the whole time but what was interesting for me was just to take a minute.

I remember from years ago this used to happen in church (back when I was a Catholic), when we used to have a moments silence of remembrance and it kind of took me back to that point but I also kind of wondered what everybody else on the pitch was thinking about in their minutes silence.

It was really nice in the mental build-up to what ended up being an 8-0 thrashing amongst a few weeks of thrashings, before we get reallocated in a fair league which suits us better, that we could take a second and stop and breathe when we ‘weren’t allowed’ to do anything else but be silent for 1 minute.

Perhaps something that we should all try to do on a daily basis, hard to think that the world would be worse if we did.