A day at the circus 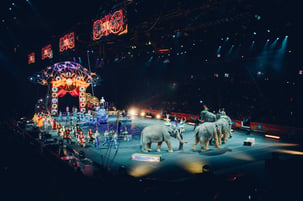 I spent Friday at the dentistry show for the first time in years.

My first reaction is genuine disbelief at the amount of aggressive and heavy overselling that’s going on all through the profession.

Your first instinct when you walk into hall 5 at the NEC (or at least my first instinct) is to be dazzled and even overwhelmed by the amount of pomp and peacocking that’s existing on almost every inch of the floor (and we have a stand here for The Academy).

It’s hard, in the first instance, to get your head around it and to not be sucked into an extraordinary and anxious doubt of FOMO, understanding that everybody else is better than you and much further ahead in their adoption of whatever technology or system or technique is being sold as you walk from stand to stand.

Two stands down from us is a bigger stand with a Ferrari 488 on it advertising a new way to do pretty much everything in dentistry in a much better way, much more quickly and earning much more money.

I don’t own one of those cars, but I have been in one, I’ve even been in a 488 Pista but I still don’t understand why there has to be one on that stand.

I find myself questioning why, over the past 5 years, our business has donated enough money to charity to buy one of these cars and why I didn’t just do that (and then put it on my stand to sell our courses).

The cost of our clinic would have bought me 12 of these but again I still don’t understand it.

After the initial anxiety though you can settle in to wandering round the many stands with many different people (most complaining that they’re not selling enough) and start to bump into friends and faces that you’ve known through the past 30 years of your working life.

The ones that fit into to my group are not absolutely certain why they’re there and the ones that fell into other groups have their own agendas for lots of different reasons.

Then the excitement builds and it’s fascinating to watch, you can sit, and people watch and see what’s going on, understanding the different techniques people are using to try and get you to buy into their message or you can just seek out the people you want to talk to.

It’s like a combination of watching the circus and being at a bazaar in Morocco, it’s just sales like it’s been for years.

Once I got my head around that I could start to enjoy the day.